The term citizen development has become quite common, especially among organizations implementing digital transformation initiatives. It is safe to say that we’re in an era where non-tech professionals without formal coding training can get directly involved in the development of business-critical apps that solve an organization's automation and digital transformation problems.

Citizen development is an approach that empowers business users (non-IT employees) to build functional business applications they need to automate and streamline their business processes. Citizen development helps maximize internal resources and speeds up the attainment of digital transformation goals in a lot of meaningful ways.

But while this approach to app development has been gaining traction over the past few years, like all new ideas, it is surrounded by a lot of questions, myths, and misconceptions. In this post, we will attempt to dispel some of these common myths to fully understand how this trend can be beneficial for an organization’s development efforts. 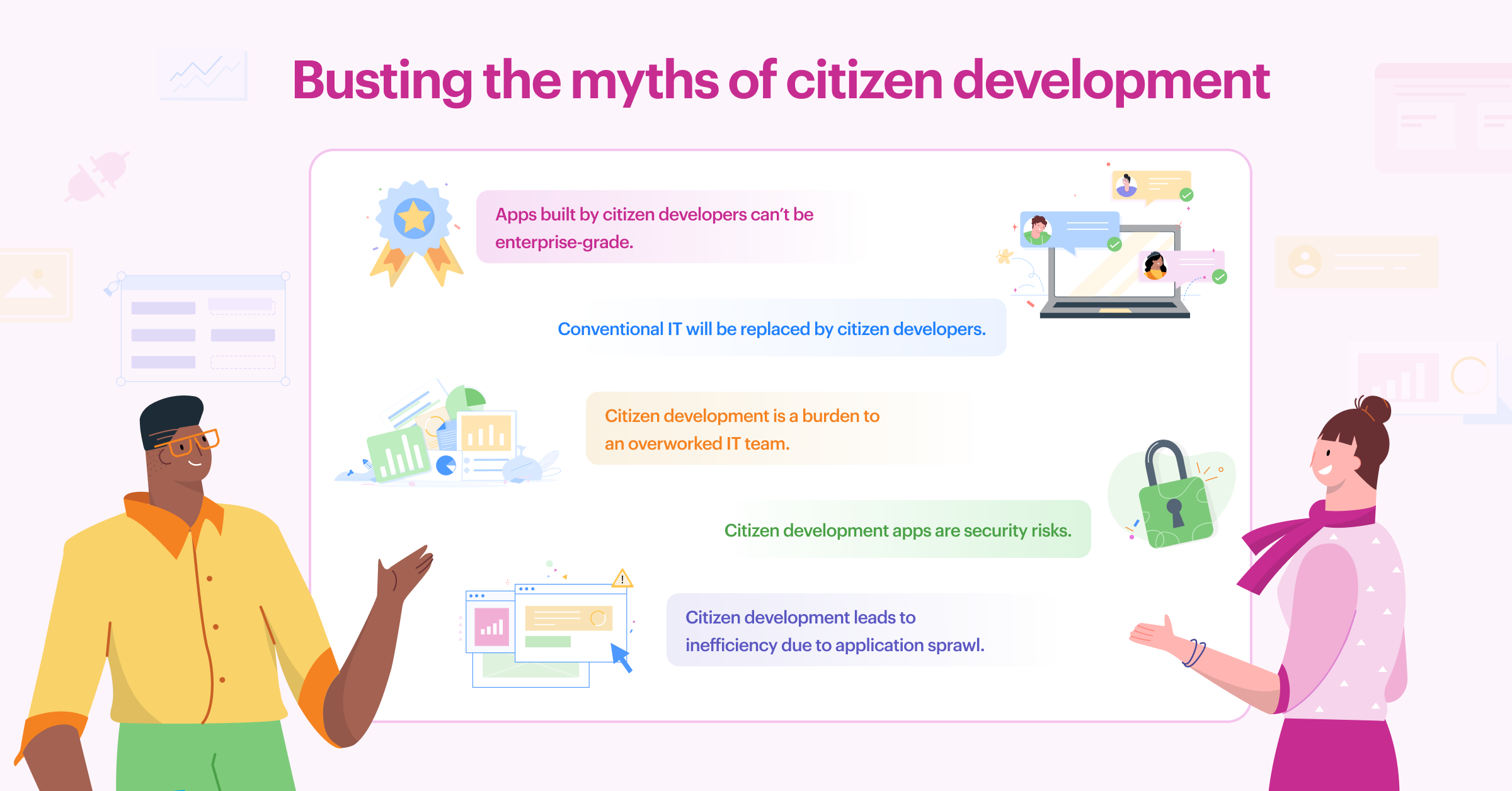 The first thought that comes to mind while thinking about low-code apps is that they work on a small scale. They’re built to automate processes or bridge the gap between systems in order to improve productivity on an individual or team level. But can they perform just as great as enterprise-grade apps built with code? Absolutely.

An increasing number of organizations are seeing the value of developing their apps in house. And a vast majority of them feel that low-code not only offers them the ease of customization and development but also helps them deploy rapidly. They’re free from the complexities of regular enterprise-grade apps but work just great for solving the specific purpose they’re created to solve.

Learn more: The Best Apps in the Company Are Made by Citizen Developers

Myth 2: Citizen developers will soon replace your conventional IT.

Citizen development cannot operate without IT. Every app built in an organization must still be monitored and controlled by traditional IT professionals. Citizen developers are only part of the development process, they don’t own it or have unfettered access. Additionally, engineers are still part of the process when it comes to customization and development.

Learn more: The Future of Apps must include Citizen Development. Here's Why.

Myth 3: Citizen development is a burden to an overworked IT team.

The demands for rapid digitalization in today's cut-throat digital business landscape puts a lot of pressure on the traditional IT team. There are many who believe that establishing a separate program that requires the oversight of IT professionals will simply stretch them even more. This isn’t true. In fact, citizen development does the opposite; freeing up time for professional developers to focus on other responsibilities.

The idea of citizen development is to allow business users to build, deploy, and control apps on their own while IT provides oversight. This goes a long way in reducing the backlog of app requests and the need for IT to provide round-the-clock app maintenance services. This reduces the burden of your engineers significantly rather than adding to it. When they do not have to border themselves with low-scale requests, pro-coders can focus on building complex enterprise-wide applications and other responsibilities.

Learn more: How Citizen Development Unites Business and IT

Security is one of the most vital considerations in any standard development project. IT teams often build apps with strict compliance with security guidelines and policies that are already in place.

However, the fact that an application is developed by a business user using a low-code, no-code development platform does not mean it constitutes a bigger security risk. In every properly executed citizen development initiative, the IT department ensures that the software development platform being adopted by the organization adheres to the company’s security standards and policies.

In fact, the boom in the adoption of LCNC and citizen development has made it compulsory to now include built-in security features and compliance certifications. This means apps built with these platforms are just as safe as apps built from scratch with code.

Learn more: Why Do You Need Governance In Citizen Development?

Myth 5: Citizen development leads to inefficiency due to application sprawl.

As earlier explained, empowering business users to create an app does not mean it’s a free-for-all where anyone can just create anything they want. Citizen development will not result in a situation where an organization has too many apps that it begins to deplete resources and lead to inefficiencies.

Kissflow's citizen development platform is a great tool to begin your citizen development journey. The low-code, no-code solution helps you build solutions that are closest to the problem in an effective way while improving employee engagement at the same time.

How to Become a Citizen Developer? Tips and Reasons for Becoming One

Citizen Development Statistics and Trends to Watch in 2022 and Beyond

This blog highlights 25 citizen development statistics, facts, and trends that indicate its role in IT and app development for digital transformation.