Traditional business process management (BPM) software has become like the cellphones from the early 90s – clunky, only basic features, and not user-friendly.

And just like the roller blade-era cellphones, the only people using this kind of BPM software either have a lot of money to burn or their business demands it. 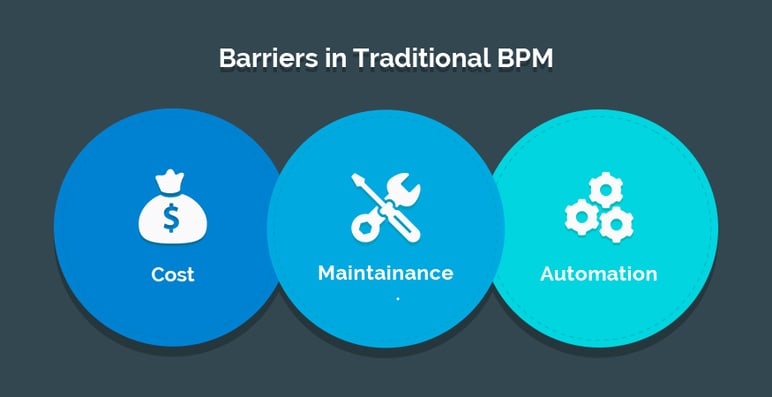 When it comes to small and medium businesses (SMBs), traditional BPM software is as out-of-mind as it was for a working-class person to think about a car phone. When faced with the barriers to entry, nearly every SMB passes on a legacy BPM tool unless it is an absolute imperative.

However, when an SMB starts to shop around for a business process management solution, a lot of what they find is like shopping at a mobile store from 1993. Let’s look at three main reasons that the traditional BPM options still aren’t ready for SMBs.

1. Traditional BPM Systems Cost Too Much

When the first cell phones came out, only the rich could afford to use them. Even though the functionality was fairly basic, it was a first-of-its-kind technology and could demand a high price.

Early era BPM software is the same. Its functionality isn’t anything to rave about, but it still takes a lot of money to create and maintain. Appropriately, they were targeted at large enterprises that either had the cash to spend, or just couldn’t live without it.

The high cost of adopting a traditional BPM doesn’t stop with implementation. Companies have to dedicate their time and resources to incorporate the solution to their existing portfolio, ensure a smooth setup, and have teams committed to monitor the software performance and maintenance.

When you flash the estimated cost of a traditional BPM system in front of a SMB, it will shut the door as fast as possible. Just like the working class of the 90s, SMBs need something much more cost effective to make it worth their time. Expensive BPM solutions limit SMBs from fully exploring their options.

For a software solution that costs so much, organizations have to additionally invest in acquiring experts and permanent teams to monitor BPM systems and analyze the data it produces. If the business process itself requires changes, only experienced programmers or consultants can make the changes necessary.

For data to matter, a BPM tool should be able to integrate with the enterprise’s existing range of software. But many traditional software stacks come with proprietary codes that don’t always integrate well with other systems. Some early BPM solutions had integration capabilities, but they again required an extremely high level of competence to pull off. This increases costs and also requires a highly skilled worker to make edits even for small changes.

3. SMBs Are Not Used to Thinking About Automation

The biggest barrier to SMBs for using traditional BPM software is perhaps the mindset that automation is not for small businesses. Of course, SMBs are constantly looking for ways to improve business efficiency and optimize their existing processes. But the main focus is usually on increasing their revenue stream and hiring more people to speed up things.

Automation for small business is what the 90s era cellphones were for the common man; they rarely thought of owning one. But as soon as less expensive phone and plans entered the market, more and more people saw the power of a mobile device. This led to improvements that allowed the general public to buy phones and do a lot more than speed dialling their families.

Now that the price tag of automation has come down, more and more SMBs are starting to realize that it is not just something for the enterprise. However, when they start exploring all the BPM solutions out there, traditional BPM providers haven’t changed their message.

Can SMBs Ever Use Traditional BPM?

Trying to fit a bulky BPM suite into an SMB’s processes is like keeping an elephant for a pet when you can only afford a retriever. It could be a costly and draining experience for everyone.

The best alternative for SMBs is to ignore the high priced options and the feeble attempts of legacy BPM products to be more mainstream. SMBs should focus on cloud-based, low-code, highly customizable BPM software like Kissflow BPM.

Just like the mobile phone market, SMBs can demand all the best features out of a BPM solution without paying overwhelming costs for it. SaaS-based BPM tools can be easily optimized to suit the workflows of any enterprise, adding value to processes that are core to the success of the business.