Why You Need a Human-Centric BPM Solution

The biggest reason business leaders shy away from adopting new software? Complexity. They’ve been burned by steep learning curves in the past and don’t see most people in their organization being able to make the leap. 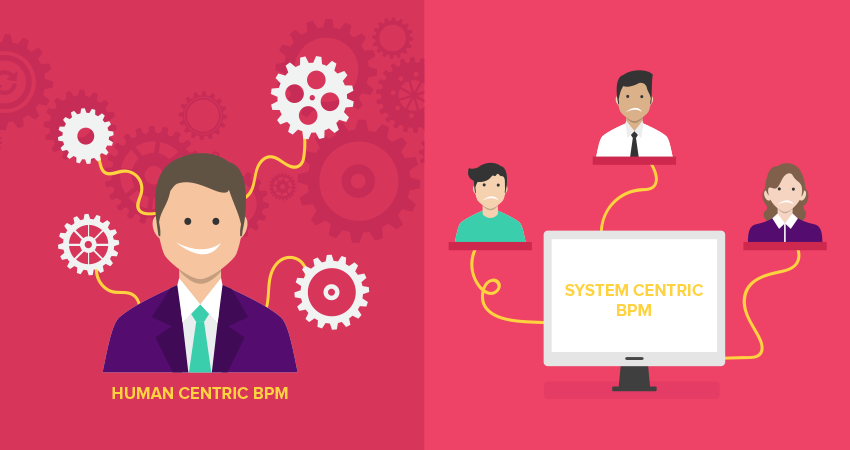 As technology has advanced dramatically in its capabilities, it’s only inched forward in its ability to mesh with the physical world and how human brains work. BPM tools are a great example. A business process management suite is capable of doing some amazing things, but programming it is so far removed from reality that most people can’t do it.

System-Centric BPM is Ruling the Roost

Because most BPM tools were designed by programmers, they often start from a coding mindset of working with the machine’s language to accomplish the task. Since the machine can’t speak our language, we must learn to speak with the machine.

This is what we call a system-centric solution. It means you must first go into the machine’s world and look through its eyes before seeing how the business process software can be applied to your specific situation.

Let’s take Carl as an example. Carl is a seasoned accountant at an insurance company and he heads a team of talented finance professionals. He knows his way around computers, and would love to automate many of his recurring business processes. But he’s been on the fence about it for a long time because:

Actually, Carl doesn’t want a BPM tool at all. He just wants an easy way for anyone in his office to automate some routine business processes without coming to him every time.

How to Identify a Human-Centric BPM

What makes a human-centric BPM option different is that rather than expecting a human to think like a machine, it’s asking a machine to think like a human. Most of the underlying logic and frameworks are similar, but the face that is on the outside presents BPM situations in a very human-like context.

A human-centric business process software puts the human elements of the process at the forefront when designing a workflow. It asks users to plot out the workflow using terminology they already think about. It doesn’t require plotting and mapping for rejections – just a simple logical sequence of tasks.

The processes that a human-centric BPM creates are extremely simple because they highlight the user-friendly interface to the foreground while pushing the technological functionalities behind the curtain. The data is still very essential to the process, but they aren’t projected prominently in the BPM design which makes the tool all the more ingenious.

Is Human-Centric BPM a Must for All Organizations?

A system-centric BPM can still be a good choice if your organization already has a lot of programmers who tend to think and talk like machines anyway.

However, as we move closer to a computer-human symbiosis, it will be more important to have a system you can give to anyone in your organization to make an automated business process. As easy as it is for your users to open up a new word processing document, email, or spreadsheet, it should be the same for creating a new workflow. Therefore, a human-centric BPM tool like Kissflow BPM is the way to go.