There’s an ever-growing need for enterprise-ready applications which has fueled innovation in the realm of app development. Businesses now rely on apps to streamline core processes, centralize operations, offer customer support, build operational agility, and gain access to actionable insights. Needless to say, not producing apps on time can give your competitors an edge.

To deploy apps in the least possible time, many companies now use Rapid Application Development (RAD). RAD helps developers build higher-quality products faster through early prototyping and iterative design testing. They develop IT solutions faster using pre-built widgets, templates, and components. This accelerates the development of new software allowing developers to build apps and modify them without affecting business operations. Today, we’ll be looking at the phases of Rapid Application Development as well as the benefits of RAD.

Why is RAD so popular in low code industry?

Every company wants to sell more, improve corporate efficiency, and maximize revenue-generating opportunities. But many companies are competing for the same consumers, and the only way to succeed is through differentiation. Companies that deliver tech solutions early become disruptive players. Every organization that wants to become more agile and profitable must embrace this technological shift.

With the RAD methodology, developers can significantly reduce app delivery time. They don’t have to wait for a complete app to test functions. They can use prototypes to conduct tests and leverage user feedback to change the core features. 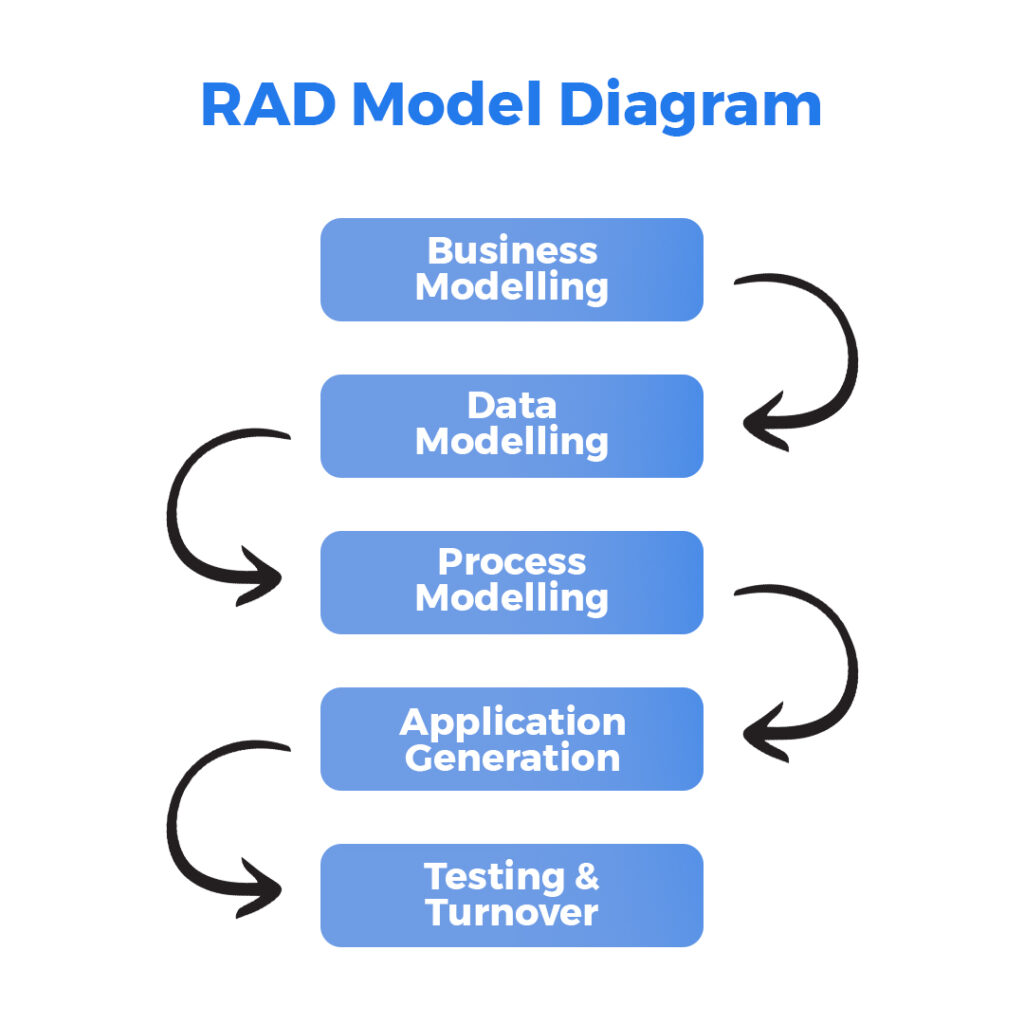 Developers can add new features and functionalities to the application at any given time.

RAD also gets rid of the planning phase in favour of prioritizing speed. Software becomes ready for use in a shorter period. Multiple testing ensures that each application fully meets the users’ needs. These are the five RAD phases:

At this stage, information flow between different business functions is defined by answering the following questions:

Information is gathered through many business-related sources. This information is combined to create a useful description of how the data will be used when it is processed.

The information gathered during the Business Modeling phase is analyzed and categorized into different groups (data objects) that are needed to support the business. The attributes of each group are identified, and the relationship between them is defined.

Process modeling is the third phase of the RAD methodology. Here, all the information groups from the Data Modeling stage are converted into usable data models. These models help extract information from the data objects for making the changes required for proper processing and are responsible for executing business functions. At this stage, changes and optimization in development can be done to increase value and quality.

Here, all the data gathered is coded, and the system that will be used to build the prototype is developed. The data models become actual prototypes that can be tested. Automated tools are used to speed up construction of the software.

This RAD methodology phase ensures less time is spent testing the prototypes created. Every prototype is tested separately to modify the components quickly and to create the best product. The overall testing time is reduced since many of the programming components have already been tested.

The business benefits of RAD


RAD increases app development speed. Developers divide an entire project into modules that are treated as different prototypes. They test the prototypes separately and then combine them to build the software. This ensures faster delivery of the software and reduces the number of bugs.


RAD tools have code generators and allow for code reuse, so there’s less manual coding. They reduce the coding and scripting time and deliverables are transferred as scripts. Working prototypes and working code are produced quickly for iterative example illustration. The process takes days instead of weeks or even months.

Citizen developers can utilize a platform-as-a-service (PaaS) model and containers for RAD and work faster and smarter while decreasing infrastructure and server needs for cloud development environments. Containers are lightweight, executable units of software that hold application code and dependencies such as libraries, binary code, and configuration files for swift deployment across different computing environments.


It’s not just the development team that’s involved in app-building. Other internal teams and stakeholders must sign off on the project and constantly monitor its progress. But most business leaders aren’t tech-savvy and work in different departments with varying needs. That’s why user feedback is so important.

User feedback is vital to successful development lifecycles. RAD methodologies allow for continuous feedback throughout the development process, so developers get the feedback they need from end users. They incorporate it into later iterations and improve the final application. Everyone gets the access they need to monitor progress. RAD framework ensures better risk management as stakeholders discuss code vulnerabilities as development goes on.

When to use RAD in app development

A powerful low-code platform like Kissflow's Rapid Application Development Platform aids in RAD allowing developers to make business applications faster than ever before. With RAD, companies can deliver software before the competition to address changing market needs.

Looking for Rapid Application Development (RAD) tools? Here are the 5 best RAD Tools that stand out from the crowd. Click to learn more.

RAD is a development model that prioritizes rapid prototyping and quick feedback over long drawn-out development and testing cycles. Click to learn more.