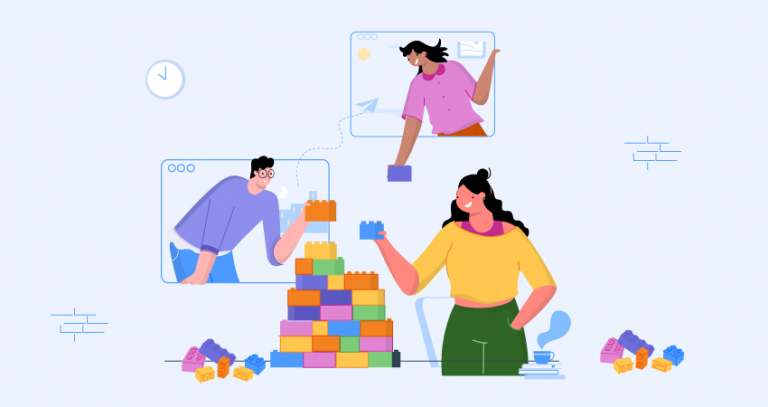 Despite the unfortunate turn of events that might have necessitated it, we can all agree that work remote beats in-office work hands down.

And the figures agree with us.

On average, remote workers are:

But then, despite the excellent stats, remote work still has some downsides to it. According to Harvard Business Review, nearly 70%[2] (two-thirds) of remote workers interviewed reported being unengaged at work. And judging by the circumstance, it’s easy to understand why. Once the human-human touch is lost, it’s hard to keep your team focused on doing their best work.

To get your best work done on time and under budget, you need an engaged team that can still connect and relate with each other across the digital divide of remote work. After all, while trying to get everyone to spend more time on their personal lives, you can’t afford to then sacrifice productivity by having your team disconnected and unengaged.

Here are 10 team building games for remote workers to get to know each other better, de-stress, or simply catch some fun. Enjoy!

Like the name implies, three truths and a lie creates a scenario where everyone has to say four facts about themselves on a video call. Here’s the kicker. Three of those will be fact, and the fourth will be made up, just enough for the rest of the team to believe. (No, you didn’t kill a dragon at age 6. You couldn’t even hold a sword at that age.)

Here’s where the rest of the team hops in and tries eliminating which ones are true and trying to figure out the lie. Once the lie is out, the player is out, and another player steps up.

2. Virtual Never Have I Ever

In this game, everyone sticks their ten fingers up where everyone else can see them. The first player goes on to say, “Never have I ever…” and completes with something they’ve not done. For example, “never have I eaten pizza topped with pineapples ????”. For every “Never Have I Ever” the player completes, everyone who hasn’t done it puts down one of the ten standing fingers.

The game continues in a circle with every player taking turns to name an activity they’ve never done. The first player to get all fingers down is the winner.

Pictionary brings together some imagination and Zoom for a great way to engage your remote team.

Here’s how it works. A player chooses a random thing in their head and writes it down. After writing it down, the player proceeds to draw the object, while the team guesses what exactly it is. The first player to guess right gets a point, and the game continues with everyone getting a turn.

The trick here is pair Zoom, Google Meet, or any video conferencing app you already work with, some screen sharing, and MS Paint, Procreate or just about any drawing app.

Truth or Dare is a pretty popular game with kids and adults alike. In the game, a player takes the stage and asks others whether they want a ‘Truth’ or ‘Dare.’ If you choose a ‘Truth,’ you’re asked a question that you must answer truthfully. On the other hand, if you choose a ‘Dare,’ you get a silly request that you must carry out. Like standing on the table and singing a nursery rhyme while video conferencing with the rest of your team.

The trick is to try keeping the truths and dares somewhat benign since you’re in a more of a professional environment.

5. This is better than that

For this game, you’ll need to choose a neutral game master to take points while the rest play. The rest of the team pairs up into smaller groups, and the game master gives every team a list of four or five objects.

That done, the game master creates a problem scenario and each team has to solve it with the tools they’ve been given. Now is where each team swings into action to devise a strategy of how they’ll use their objects and rating them from most important to the least important.

To be fair to the game master, after a turn has ended, you can choose another game master and pair up teams again.
This game fosters creative problem solving, team bonding, and some good ol’ fun.

Movie night is another excellent team-building activity you can use to grow the tea spirit and get everyone to know each other better.

Every weekend, one team member hosts a movie night where they stream a movie of their choice while screen sharing for everyone else to see. As the movie progresses., the host can take points virtually, explaining the story line via chat, making any need-to-know points, and generally telling everyone else why they love the movie. Repeat every week with a different person hosting the movie night.

7. Photo of your life

Photo of your life offers an opportunity for a remote team to share things about their personal life without any pressure. In the game, a player takes a picture that represents a significant part of their life, posts it for others to see, and goes ahead to tell others their history with the photograph, what it means to them, etc. The game continues in a circle until everyone gets a turn or for as long as you like.

In this game, players put themselves on mute and either begin singing a song, making a statement, or saying just about anything. The rest of the team then tries to guess what the player on mute is saying and exchanging ideas to help them catch it faster. The first player to guess correctly scores a point and the game continues in a circle.

This game tests your team collaboration skills, in the face of uncertainty and gets your creative juices flowing. In this game, everyone takes a turn and each says a sentence after the other. The aim is to watch out and see what story you end up creating and the team members that bring in the most intriguing parts into it.

Mail everyone on your team packed tea and coffee from the best brand you can find. On a set day, you all can get together, brew, and have a tasting ceremony, while telling any stories worth hearing. It’s a great way to create a virtual office culture and bond over a cup.

While trying to catch some fun, it’s important to understand the aim of virtual team-building games—to build a stronger personal bond that makes everyone on your team easy to relate with. Ensure you keep your team-building games simple, educative, and frequent. Your growing team productivity will thank you!